Native Advertising: Does It Really Work?

Any tool, trick, or tactic a company can use to gain an advantage in the digital marketing space is a good investment. But not every tool or tactic works well, and some that work well with certain audiences may not work as well with others.

Native advertising is a fairly new method of digital promotion that has shown a lot of promise. The numbers show that people look at native ads 53% more than they do at regular ads. That’s a significant boost in reach. But what is all the fuss about – and does it really work? Read on for a quick breakdown of how native ads work and whether they’re worth the trouble.

What is Native Advertising and How Does It Work?

People feel bombarded by ads, and this has led to a downturn in engagement. From pop-up ads to banner ads, they no longer look at the content. They just scroll on by instead. That’s a problem for marketers, whose bread and butter rely on making sure their KPIs look good. The answer to this dilemma is native advertising, which aims to fit in with the look and feel of the page.

Native ads go against the idea of trying every trick to catch users’ eyes and draw their attention away from the editorial content on a page. Instead, they work hard to harmonize with the rest of the content on the page or website to provide an uninterrupted experience.

These ads are usually found on social media platforms as part of users’ feeds and on websites as part of sponsored content. They can also be found on music streaming services like Spotify or part of content creators’ YouTube videos.

The key to creating a native ad that doesn’t encroach on the user is to work with the platform of choice when crafting the ad. The caveat is still presenting it so that the user realizes it’s an ad after looking at it. Otherwise, this compromises editorial and platform neutrality, and website owners won’t accept that.

Naturally, companies love the idea of native ads because they get more overall engagement. For example, according to the Content Marketing Institute, 70% of people would rather learn about products through content than traditional ads. There are plenty of positive statistics like these, and the figures show why companies feel native ads are a valuable part of their toolbox.

When done well, native ads have a much higher chance of attracting the customer and building a voice of authority around the company or their product. People don’t seem to mind native ads as much as other forms of advertisement. The bonus here is that they’re already in a less irritating mood when they’re looking at them.

On average, advertisements require quite a bit of time to research and craft to make sure they have the best impact possible. Native ads, however, take a whole lot longer because they aren’t just selling something. They need to fit in with the other content, look natural, and help and entertain the user in somehow.

Native ads can be quite controversial, and there have been many debates about their use. When a website or social platform runs a native ad without expressly portraying it as paid-for content, consumers can feel like they’re being tricked. It can damage the platform’s reputation and create dissolution with the customer.

Because of this, several organizations – including the Federal Trade Commission – are calling for regulatory measures. Regulatory proponents want to ensure that native ads are created with the user’s best interests in mind.

On the flip side of that coin is when a native ad feels forced into a space with no business being in. This can easily happen when there’s little connection between the company behind the ad and the content being created. It can result in a jarring jump from the content at hand to what’s clearly an ad. One famous example of this is that time The Atlantic – a publication known for credible journalism – published an article praising the leader of the church of Scientology.

Getting that balance of providing informative and entertaining content in the form of an ad makes native ads so hard to implement well.

Native ads can be a great way to attract more engagement and build new leads. However, they have to be crafted well and implemented carefully. Depending on the industry, for some companies that’s not worth the effort.

The best course of action for any marketer who’s wondering about native ads would be to spend the time creating one ad and see how it runs. If the return is worth the investment, then a case can be made for adding more to the marketing plan. 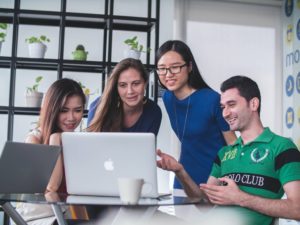 How to Write Content for People and Optimize for Google?

What Are the Most Effective Digital Marketing Strategies?

Read More
October 2, 2020
Give your brand the
proper throne
Contact us